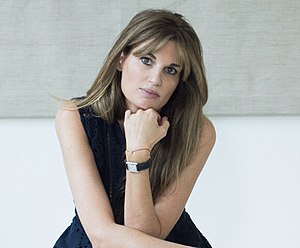 Jemima Marcelle Goldsmith (born 30 January 1974; known as Jemima Khan for work) is a British screenwriter, television, film and documentary producer and the founder of Instinct Productions, a television production company. She was formerly a journalist and associate editor of The New Statesman, a British political and cultural magazine, and served as the European editor-at-large for the American magazine Vanity Fair. from Wikipedia