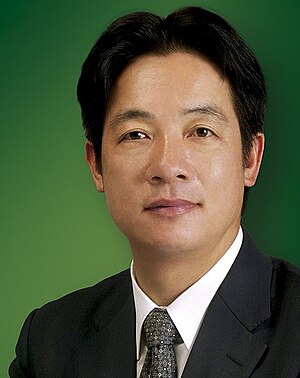 William Lai Ching-te (born 6 October 1959) is a Taiwanese politician who has been the Vice President of the Republic of China (Taiwan) since 2020. He served as a legislator in the Legislative Yuan from 1999 to 2010, and as Mayor of Tainan from 2010 to 2017, prior to taking office as premier of the Republic of China.On 24 November 2018, he announced his intention to resign from the premiership after the Democratic Progressive Party suffered a major defeat in local elections, and left office on 14 January 2019 after the swearing-in of his successor Su Tseng-chang. from Wikipedia