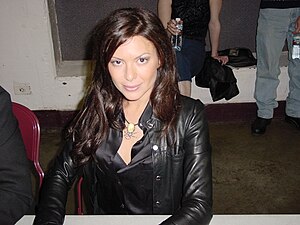 Kari Samantha Wuhrer (born April 28, 1967) is an American actress, model, and singer. Wuhrer began her career as a teenager, and is best known for her time as a cast member on MTV's Remote Control, as well as her roles as Maggie Beckett in the television series Sliders and as Sheriff Samantha Parker in the horror comedy film Eight Legged Freaks. from Wikipedia