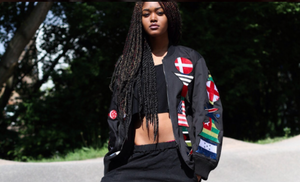 Chynna Marie Rogers (August 19, 1994 – April 8, 2020), known mononymously as Chynna, was an American rapper, disc jockey, and model who was signed by Ford Modeling Agency at the age of 14 and affiliated with the ASAP Mob.

Rogers became connected to ASAP Mob through ASAP Yams, whom she had approached on Twitter. from Wikipedia