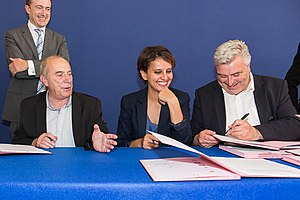 Najat Vallaud-Belkacem (French pronunciation: ​[naʒat valo bɛlkasɛm]; Arabic: نجاة فالو بلقاسم; born 4 October 1977) is a former French jurist and politician of the Socialist Party (PS) who was the first French woman to serve as Minister of Education, Higher Education, and Research in the governments of successive Prime Ministers Manuel Valls and Bernard Cazeneuve from 2014 until 2017. Since 2020, she has been the director of the One Campaign in France. from Wikipedia