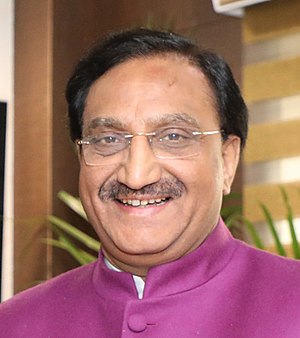 Ramesh Pokhriyal (born 15 July 1959), is an Indian politician who was appointed on 31 May 2019 to serve as Minister of Human Resource Development and as of July 2020, following the ministry's name change, his title was changed to Minister of Education.He was asked to resign from his position in July 2021, briefly before a cabinet shuffle in which several high ranking ministers were sacked citing poor performance. He represents the Haridwar Parliamentary constituency of Uttarakhand in the 17th Lok Sabha.He was the 5th Chief Minister of Uttarakhand from 2009 to 2011. from Wikipedia