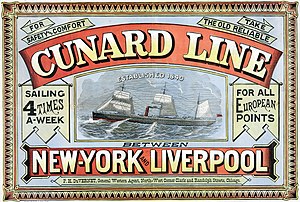 Cunard Line () is a British cruise line based at Carnival House at Southampton, England, operated by Carnival UK and owned by Carnival Corporation & plc. Since 2011, Cunard and its three ships have been registered in Hamilton, Bermuda.In 1839, Samuel Cunard was awarded the first British transatlantic steamship mail contract, and the next year formed the British and North American Royal Mail Steam-Packet Company in Glasgow with shipowner Sir George Burns together with Robert Napier, the famous Scottish steamship engine designer and builder, to operate the line's four pioneer paddle steamers on the Liverpool–Halifax–Boston route. from Wikipedia